Fife & Drum Miniatures is a range of 1/56 scale figures (approximately 30mm in height) sculpted by Richard Ansell, and is devoted to the American War of Independence. The figures may be purchased from Der Alte Fritz through this blog, using Paypal for payment. Click on the page tabs for Crown Forces, American forces and artillery equipment to see pictures of the individual figures.
Winner of the "Best Historical Miniatures Range of 2011" by The Miniatures Page.

AWI Hessians Are Available For Sale

The AWI Hessians are now in stock and they are ready for on-line sales today (Friday July 8, 2016) at the Fife & Drum web site and on-line store:

Email ThisBlogThis!Share to TwitterShare to FacebookShare to Pinterest
Labels: Hessians


To kick off the Fourth of July 2015 weekend, Fife & Drum Miniatures is offering a new 1776 Deal for our North American customers. Any orders for American Revolution (AWI) figures received before July 15th, 2015 will receive FREE SHIPPING and a 10% DISCOUNT for the entire order.

There are two ways to order:

1) place an order via e-mail to: fife_drum_minis@yahoo.com and type the words "1776 Deal" on your email to receive the discount and free shipping.

2) place an order on the Fife & Drum website Fife & Drum Miniatures Web Site which creates an automatic Paypal order (however, I will have to refund your 10% discount via Paypal since our web shopping cart doesn't provide for discounts).

This offer is only good for customers in North America and applies only to the AWI figure and equipment range. 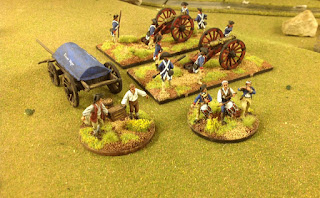 Battle of Kolin Game at SYWA Convention in 2005


While I continue to convalesce from surgery on my right wrist, I thought that I would post a few favorite pictures from the past with minimal commentary. This first sentence alone took me 5 minutes to
type. These pix were taken at the SYW Association convention in March 2005. This was my first try at terrain boards. 6ft by 24ft table as I recall with one back table for the Kaiserstrasse and all RSM figures.

The group of four figures are done in "charging" poses and are shown on some of the new horses that Richard Ansell made exclusively for our AWI range of figures. They can match up against our British Legion and British 17th Light Dragoons in either the Pennsylvania - New Jersey theatre of operations or with General Greene's command in the South.

Regimental History (paraphrased from Troiani)
The 3rd Continental Dragoons were raised on January 9, 1777 (so they will fit right in with the 1777 Philadelphia Campaign) by Colonel George Baylor. While recruits and horses were readily available in his native state of Virginia, the shortage of horse equipment and weapons limited his recruiting to only one troop. The troop was attached to General Washington's headquarters guard and became known as Washington's Bodyguard or Lady Washington's Horse. The troop served in this capacity until 1778.

The regiment was virtually wiped out when it was surprised in an attack on its billets in Tappan, New Jersey on September 19, 1778 by British light troops. Half of the 104 men on hand escaped and attempts to re-raise the regiment were unsuccessful as it never exceeded a squadron in strength after Tappan.

A squadron of the regiment served in the Southern Theatre of Operations, under the command of Lt. Colonel William Washington. They were amalgamated with elements of the 1st Continental Dragoons (also available from Fife & Drum Miniatures). The combined regiment fought at the battles of Cowpens, Guilford Courthouse and Eutaw Springs.

The new product codes for the 3rd Continental Dragoons are as follows (sold as single figures including the horse):

To order, just send me an e-mail at:

And the I was able to paint all four of the British 17th Light Dragoons that were just added to the range. I had them done in charging poses so that they would fit in with the British Legion in the Carolinas Campaign.

I just received two large boxes full of castings from Griffin Moulds today, and the shipment included the new Fife & Drum AWI Dragoons: British Legion Cavalry (7 poses), the British 17th Light Dragoons (4 charging poses) and the 3rd Continental Dragoons (4 charging poses). I only had time to glue, blackwash and photograph the British Legion figures this evening, so I will do the rest of the figures in a day or two and post the pictures here.

I will be sending figures out to the Kickstarter backers first, starting next week, but after that the figures are available to everyone. If you did not participate in the Kickstarter campaign you are probably kicking yourself wondering why you did not back the campaign. Not to worry, feel free to pre-order any of our Continental or British AWI dragoons and I can start shipping in two weeks. There is no payment necessary until I am ready to ship you your figures, but the pre-order ensures that I am able to set aside the figures that you want.

For the time being, we are selling the cavalry as single figures, but eventually the plan is to package them in packs of two or three figures.

I was able to paint all 8 of the new Fife & Drum 1st Continental Dragoons as samples yesterday - that's a pretty good painting pace, finishing 8 cavalry, from start to finish, in one day. I always paint at least one of the figures complete - start to finish - because this gives me a better feel for how to paint the rest of the figures: i.e what order should I paint the various bits and pieces of equipment and cloth. Once that first figure is painted, then the others follow more quickly.

Here are the new product code numbers for each of the eight new figures:

The figures are sculpted such that one could create a regiment with a more formal appearance, an open order skirmish appearance, or a mix of the two. For a more formal looking regiment, use the four figures shown in the two pictures above. For example, you might select one each of the officer, standard bearer and the trumpeter plus nine of the trooper with shouldered sword to create a squadron or regiment  of 12 dragoons.

The you could add one each of the four skirmishing poses (firing pistol, firing carbine, reloading carbine or rested carbine) to bring your wargame unit up to 16 figures, which is probably a good number to have in most AWI games. The skirmishers could either augment the strength of the unit, or if you base your cavalry on the standard 2-inch square base, you could remove one stand of "formal" dragoons and replace it on the table with two individually-mounted skirmishers.

If you want a more open, skirmish order look to your regiment, then I would recommend selecting the officer (pointing to where a target is) and perhaps the firing pistol and firing carbine and reloading figures. Then, you could have a reserve in your skirmish line consisting of the trooper with the carbine resting on his right thigh and perhaps even the standard bearer and trumpeter posted in the rear with the reserve line. I would use the standing horses for the skirmish poses.

I elected to paint the 1st Continental Dragoons in their earlier brown coat with green facings uniform, which is kind of drab when compared to the more spectacular red coats of the British 16th Light Dragoons that I painted last week. The regiment later converted to a blue coat with red facings. I used the brown  coat since that is likely what the regiment wore during the Philadelphia Campaign of 1777-78, which my AWI Continental army is modelled after.

Ordering Information: you can place a "pre-order" with Fife & Drum now, but you will not be charged anything until I am ready to ship the figures. I just need about a week to process orders from some of our Kickstarter backers (they get their figures first) and then after that, I can start offering the figures to everyone else.

To order, just send me an e-mail at the address posted on the upper right hand corner of this page:

Infantry: $2.00 per figure
Mounted: $6.00 per figure (includes horse)
Plus Applicable Postage
Send me an e-mail with your order at:
fife_drum_minis(at)yahoo(dot)com
Paypal Accepted